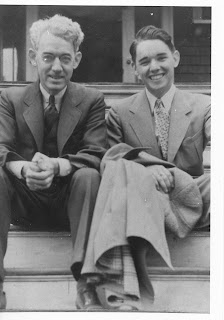 My sister Betsy is visiting from Berkeley, and Debbie is here from Australia -- we've been celebrating my Dad's 95th birthday. Yeah, he was born in 1916. He remembers his grandfather reminiscing about fighting in the Civil War. That's a long generational memory. Too bad our national memory isn't as good as my old Dad's.

Betsy and I wanted to go to one of the April 4th rallies organized all across America on the anniversary of Martin Luther King's assassination. We went to MLK Park on MLK Avenue South, on a chilly, rainy afternoon. It was inspiring despite the weather and the turnout of only a few hundred people -- still, a few hundred ain't bad, mainly union members like myself (SEA, WEA, NEA -- a teacher and public employee). Rule of thumb: for every one that shows up, a hundred others share the feelings but haven't yet felt the fever in their bones.

Yes, it was inspiring to hear voices loudspeaking the truth about the poor and middle class getting taxed and cut and told to make sacrifices, while corporations and banks and the super-rich wallow in wealth. "Need is not the crime; greed is the crime!" Can anyone doubt the agenda here -- to roll back the gains made by working people and the middle class over the past 40 years, and ensure the hegemony of the super-rich and the corporations? Could it be any plainer?

There's plenty of money to provide for everyone, but the money is in too many of the wrong places, in too few hands.

It was a modest gathering at MLK Park. It's clear, though, whose side Martin Luther King himself would be on, had he lived; had he not been assassinated. Thankfully, he was not silenced. His voice grows louder with every new injustice.

Wisconsin: an unlikely rallying cry for the new wave of popular power. The attempt to gut unions and the right of public sector employees to bargain collectively has hit a nerve. Hundreds of thousands stood in 15-degree temperatures and a blizzard in Madison, Wisconsin, slept in the State House, would not be moved, to defend their rights. Their action was seen and heard around the world. Seattle: don't let a little rain stop us! Remember the WTO? Remember Egypt? Was Martin Luther King killed defending the rights of corporations to avoid paying taxes? No; he was killed in Memphis, Tennessee, where he had gone to help defend the rights of city employees -- garbage collectors -- to form unions and collectively bargain for a livable wage, a decent life, and some respect as human beings.

The powers that be in this country don't give a flying fuck about your wages, your life, or your self-respect. Standing there in the park, in the rain, listening to the speakers and watching the waving signs helped me feel connected to the power we still have as people when we act together and do give a flying fuck what happens to our brothers and sisters.

Next time, don't send an email; don't give the revolution a "thumbs up" on Facebook. Come out and bring your umbrella. The revolution needs all of us.
Posted by William Rose at 5:46 PM